Before you start photographing the milky way, it helps to understand exactly what it is.  You probably already know that the milky way is the galaxy that our solar system resides in, but what about that part in pictures?  What part of it is that?

One of the most common questions I’m asked when people view my milky way pictures is whether that big bright thing in the sky is one of the spiral arms of the milky way.  The answer to that is no.  Actually, it’s the complete opposite.  That is the dead center of the galaxy.

A visualization that I’ve found that helps is that of a frisbee.  You’ve probably seen lots of renders of our galaxy from the top or at an angle.  From that angle, Earth is located about half way between the center of the galaxy and the outside edge. 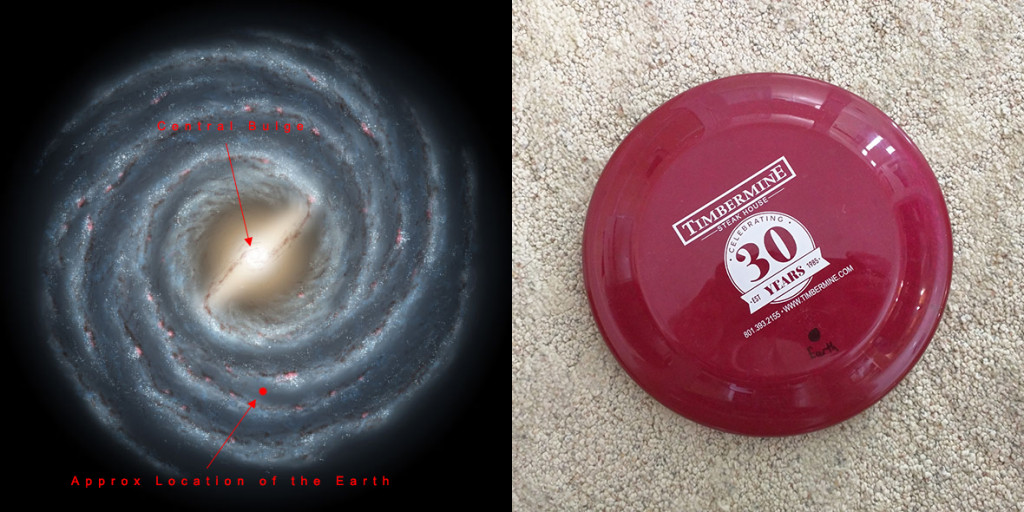 Think of the milky way galaxy like a frisbee

Now imagine taking those renders and rotating them downwards on their axis until you are looking at it straight from the side.

Now turn that frisbee sideways (try to ignore my hand!)

That is roughly what we are looking at in our sky.  The only difference being that we’re seeing it from the inside, half-way between the outer edge and the core.  That means in my Delicate Arch image at the top of this article where we’re looking in towards the center, we are seeing 3/4’s of the width of the Milky Way, with the other 1/4 being behind us (behind the Earth’s horizon).

A (very) rough approximation of what you’re looking at in my “A Delicate Night” image.

One last quick note.  When you hear people refer to the “Milky Way” as it is seen in pictures, and as I will write about in the next article, it is a bit of a misnomer.  Generally they are specifically talking about the milky way core and the area around it.  As you can see in the image above, the milky way itself is actually all around us.  So when someone says “in the northern hemisphere, the milky way is only visible from March-November”, as I will explain in the next article, what they’re really saying is that the milky way CORE is only visible from March-November.  In the winter you can still see the back 1/4 of the milky way (pictured below).  It is just not as photogenic as the core so most people focus on trying to capture the core.

The less photographed side of the milky way.

There you have it.  I think having a cursory understanding of what the thing you’re looking to photograph is before you attempt to find it and capture it.  If you want to keep going down the path to get milky way images like mine, the next step is to learn how to find the milky way (core) 😛