Note: If you’re just here for the pics, feel free to scroll down!  Otherwise, read on!

Living in Northern Utah has its advantages, especially for a photographer.  Chief among them is not only the great local scenery, but the additional amazing scenery that rolls out a mere weekend trip away.  One of the eight National Parks within a 4-hour drive of home happens to be none other than the nation’s oldest, Yellowstone National Park.

We’d made a quick half-day jaunt to Old Faithful once before when visiting Grand Teton National Park, but this was our first proper trip to Yellowstone.  Even so, Yellowstone is a big park that begs for at least a week-long visit.  We had only a weekend, but were determined to make the most of it.

Other than some night-time milky way photography (which I will share later in a separate post), the main goal of this trip from a photography perspective was wildlife.

I hadn’t really done much with wildlife before, so I picked up a Tamron 150-600 lens for the weekend from lensrentals.com and got to reading up on what I should expect.  Fast shutter speeds, a stable platform, and a lot of patience were the gist of it (among many other smaller technicalities).  The latter was going to be difficult with a 1-year old in tow, but we’d make the best of it.

We didn’t have to wait long once we got into the park, as soon into a nice drive on the West Entrance Road along the Yellowstone River we spotted a group of cars pulled over on the side of the road, and joined them in watching a family of elk. 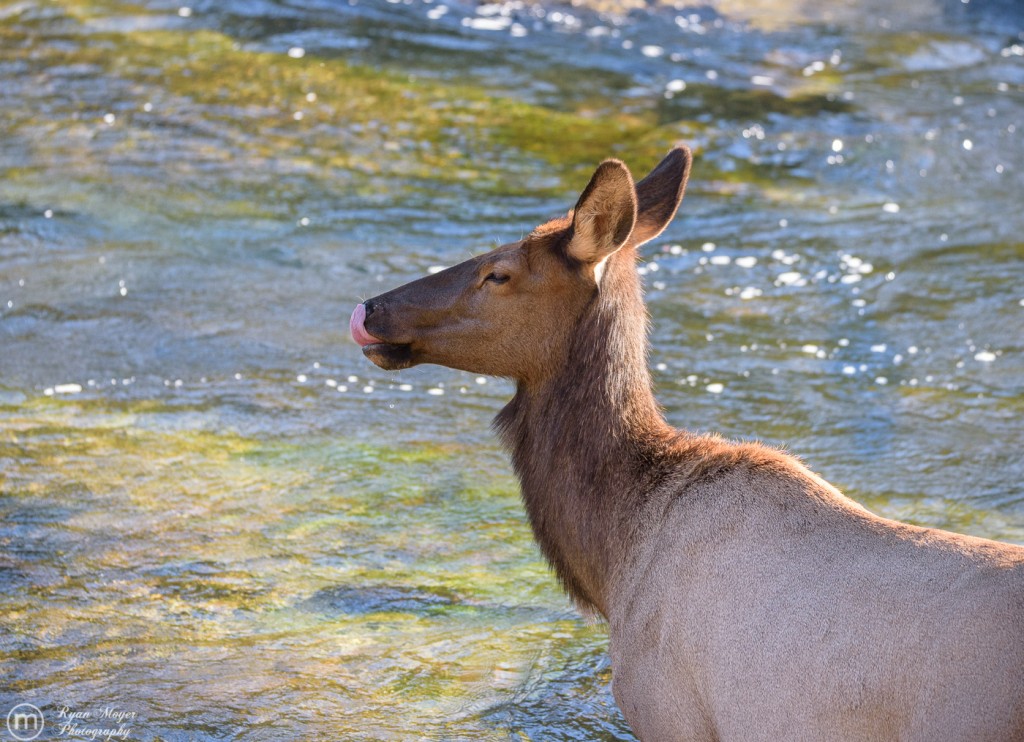 The water was chilling, and no doubt refreshing to drink. This guy was certainly enjoying it.

We stayed for a while as I experimented with different compositions to capture the elk.  As they spread out my goal was to get one of them in the foreground with one of his buddies in the background with some nice blurry bokeh.  It was difficult to get an angle with the river cutting us off, made further difficult by a daring (stupid?) photographer that walked set up less than two feet away from one of the elk (I thought for sure he was going to get kicked).  Once he moved out of the way I managed to grab the shot below.  Not quite why I had envisioned, but pleasing nonetheless. 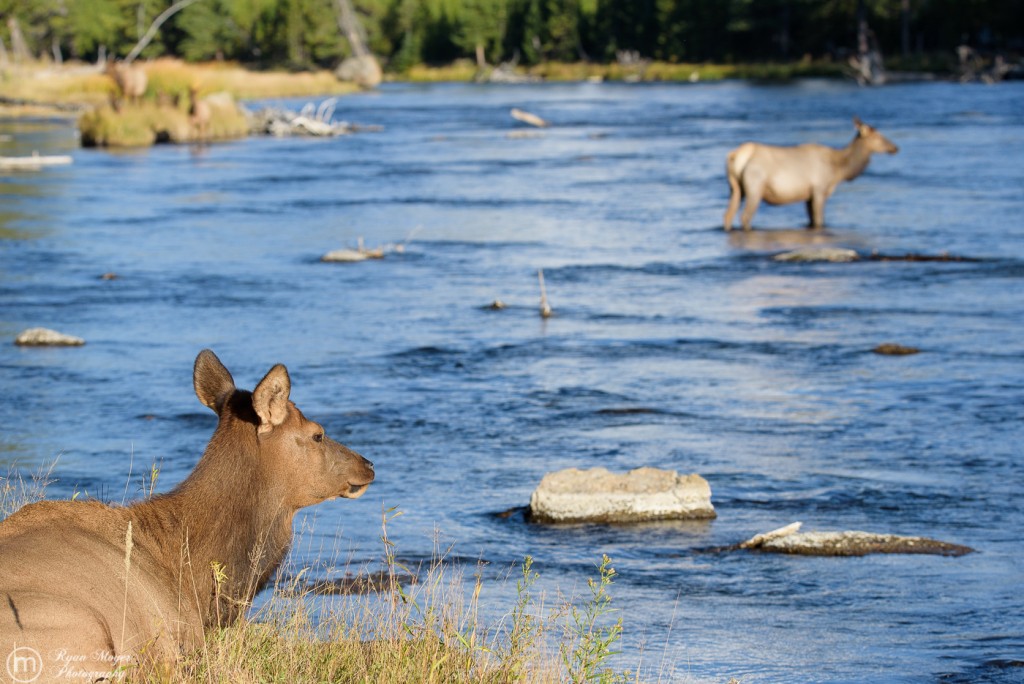 One lightning quick coyote that was too fast for me to pull out my camera in time wrapped up our wildlife sightings for the first evening.  We spent an hour or so at Grand Prismatic Spring and then called it a day. 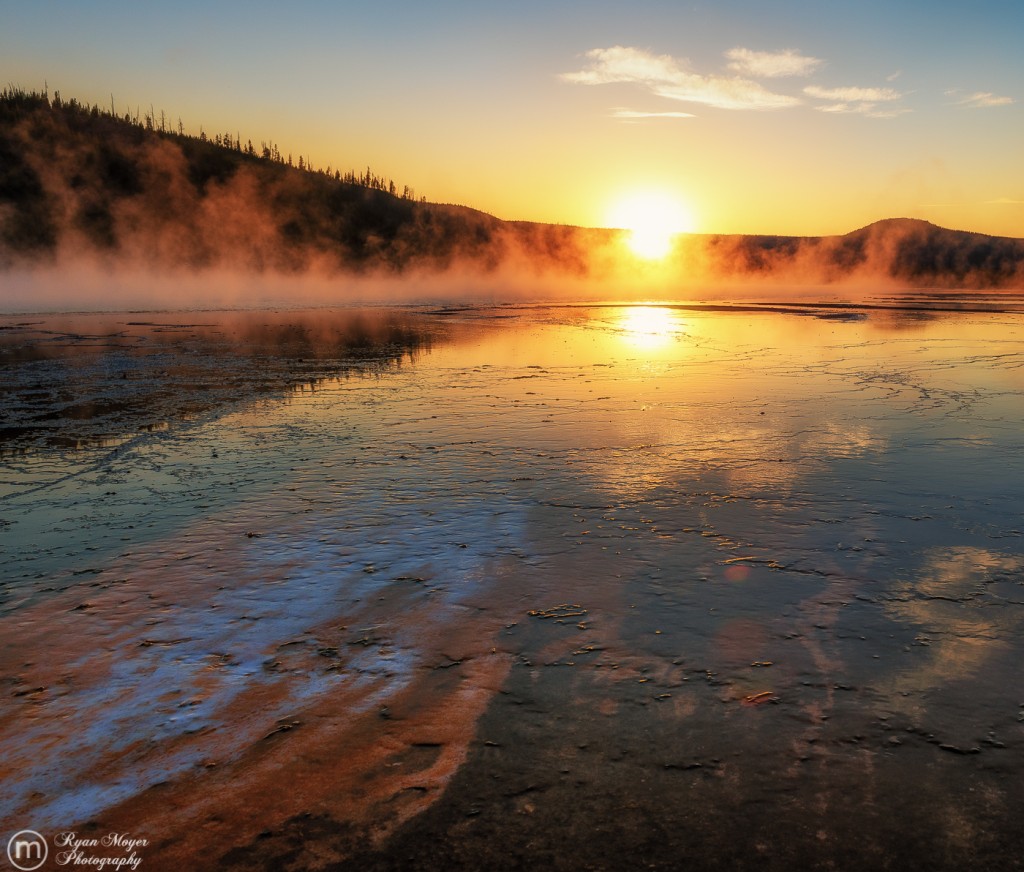 Day two, our only full day at the park, allowed us to venture a bit further into the Hayden Valley area (which is a hotspot for wildlife) after a quick stop and short hike in the beautiful Grand Canyon of the Yellowstone area.

Unfortunately there was a wildfire in the area (which usually happens a few times a year) and some unlucky wind left Hayden Valley full of smoke, eliminating any chance at shooting wildlife at a distance (the road through Hayden Valley is elevated a bit over the plains of the valley where wildlife like to graze).  However, with some completely separate recent wildfires also leaving the valley at home in Utah full of smoke several weeks prior, I knew that this would create some really nice warm light later in the day when the sun got lower in the sky and had to cut through the smoke at a low angle.

In the meantime, we journeyed on through Hayden Valley to the Fishing Bridge Visitor’s Center, where one of the rangers informed us that there had been a recent grizzly bear sighting nearby at Mary Bay.  Excited, we headed over there but came up empty on our grizzly search….for now.

With the sun now getting low, it was time to head back towards Hayden Valley.  Luckily, a heard of bison that had blocked us in traffic early in the day was still happily hanging out near, and in some cases on, the road. 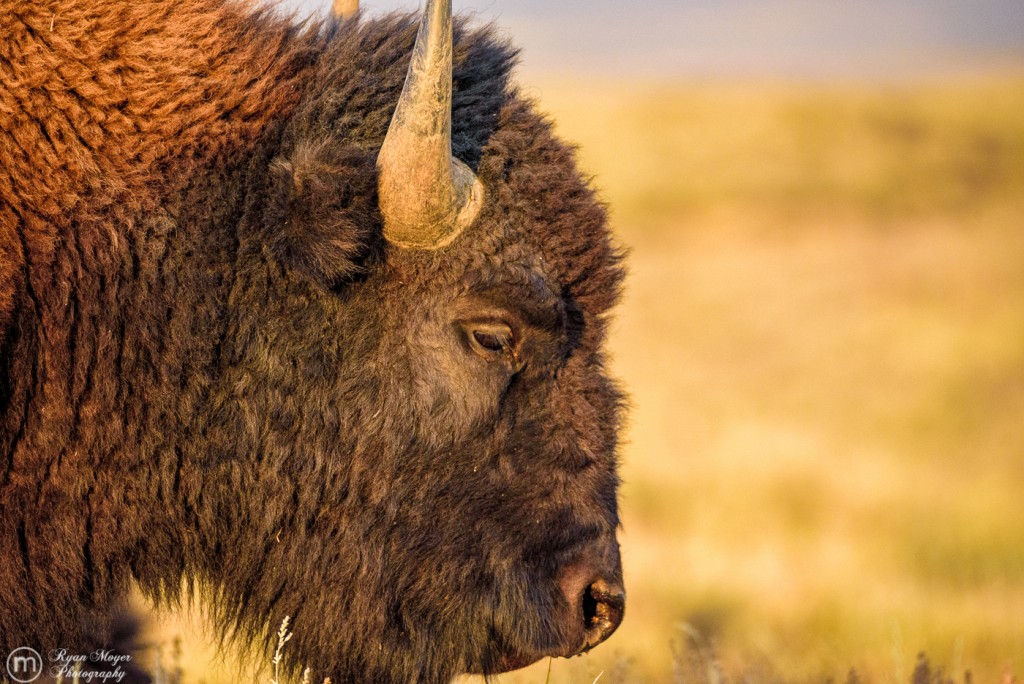 I actually took the shot above from the car as there wasn’t really any space left to pull off the road (it is very important in Yellowstone to pull off the road only if you can get all 4 of our wheels completely off the road).  I braced the long Tamron lens on the window sil, zoomed in nice and close, and fired away.

On the way out I spotted a small herd of bison a little ways in the distance on the opposite side of the road.  I had been hoping to catch some of them on that side as well to also try shooting them with the warm sunlight as a glowy backdrop, highlighting their silhouettes.  A quick U-turn to find a good spot to pull off and the shot was mine. 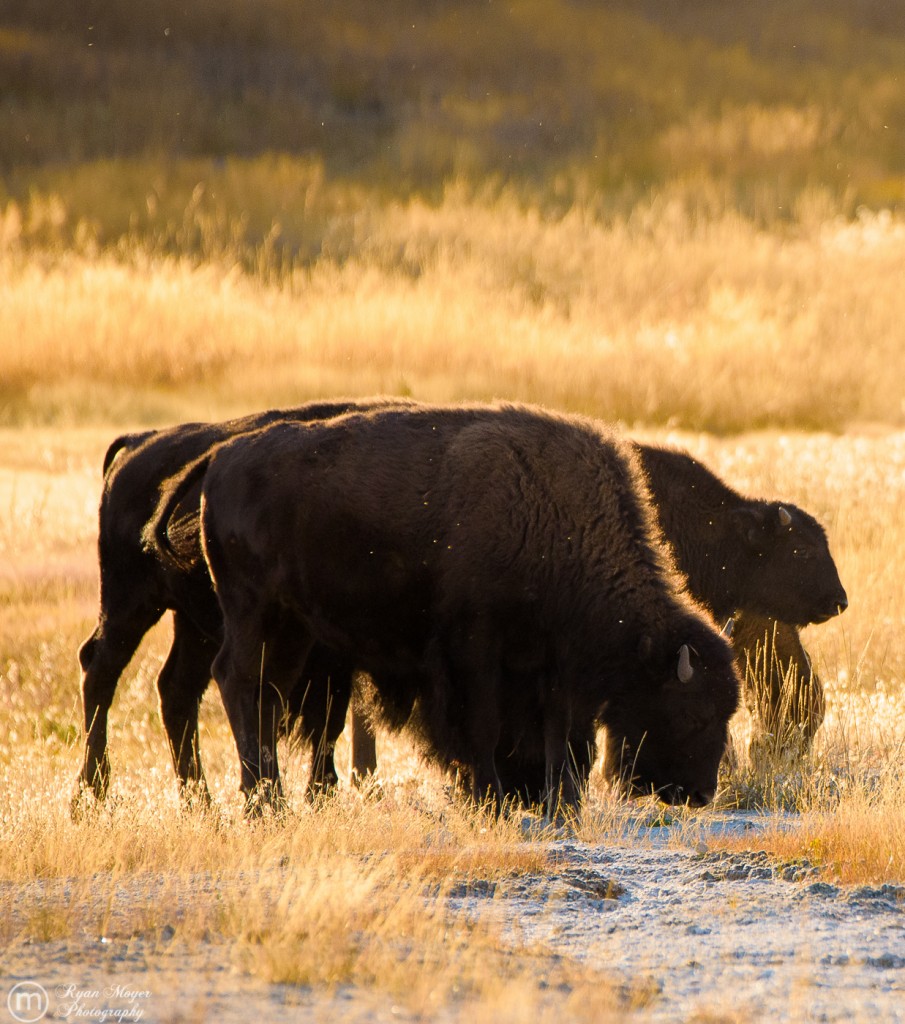 At this point, as our second and last day was winding down, we had seen both some amazing scenery and some cool wildlife, but we’d been skunked in Yellowstone’s two most prized animals – wolves and bears.  We weren’t in the right area for wolves but Hayden Valley is a good spot for bears so we were a little bummed that we had missed them.  Then, as the light dipped below the horizon and we emerged out of Hayden Valley and started heading back, we got lucky.  As we rounded a bend we came across a multitude of cars pulled off the road.  There were three rangers in the area directing people to pull all the way off.  We had seen traffic jams due to bison and elk, but this had the feel of a bear-jam.  As a photographer walked by with what appeared to be the world’s tallest tripod and a 600mm prime lens that appeared about 3 times as large in diameter as my already huge 150-600 Tamron zoom, I considered it all but confirmed.

The bear was a grizzly, which was doubly exciting because this was my first time seeing a grizzly.  He wasn’t in the most photogenic spot, a few hundred yards away in tall grass and hunkered down digging something most of the time.  I doubt the local guys with those big $15,000 lenses were rushing to share their shots of this guy, but it was my first grizzly so I am! 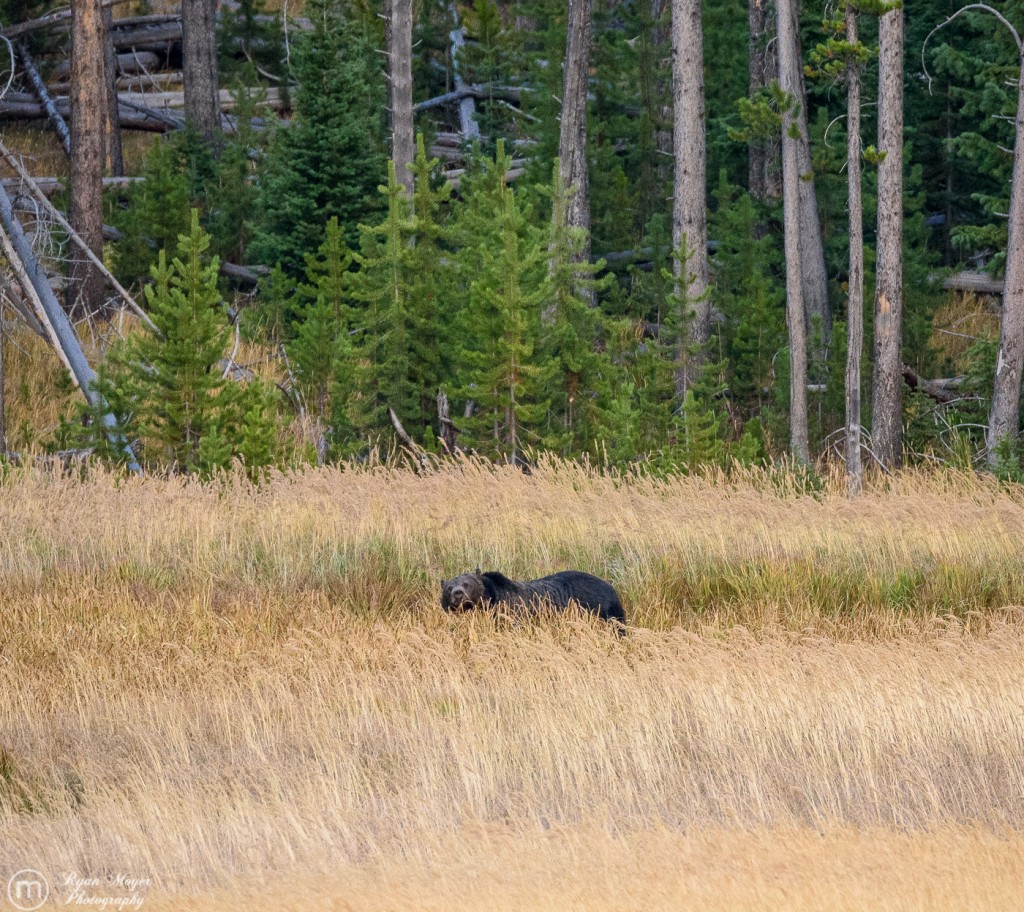 We stayed out watching him until the light got too dim to shoot with decent shutter speeds, which was probably somewhere around an hour.  In all that time he only picked his head up and looked our way a couple of times, but it was fun to watch him digging nonetheless.

That concluded our day and was the last of the wildlife shooting for this trip.  We headed back to town to get the little guy to sleep before I went back into the park for some milky way shooting, where I would encounter some wildlife that I did NOT want to see, but that’s a story for another day!